Pete suffered from a stuffy nose, sinus pain and hearing loss before being diagnosed with Granulomatosis with Polyangiitis (GPA).

Pete suffered from a stuffy nose and hearing loss before being diagnosed with Wegener’s (now called Granulomatosis with Polyangiitis, or GPA). He’s been living with the condition for over 9 years.

It’s good to get the chance to share my journey with you in the hope that it helps. Vasculitis is an insidious illness that initially manifests itself over a period of around 6 months. I became increasingly concerned that the stuffiness in my nose had progressed to sinus pain, nasal crusting, facial neuralgia and then hearing loss. Within the time frame above, I had total hearing loss in one ear and around 50 percent loss in the other.

Initially, doctors were treating the effects of the condition rather than trying to determine the cause of the condition. That all changed when I eventually got a diagnosis of vasculitis. Because all my symptoms related to ENT, I initially thought that vasculitis was similar to Tonsillitis, Sinusitis, Laryngitis (because they sounded the same). A quick google search proved that there was no similarity whatsoever and that Wegener’s (now called Granulomatosis with Polyangiitis) was a real nasty disease. 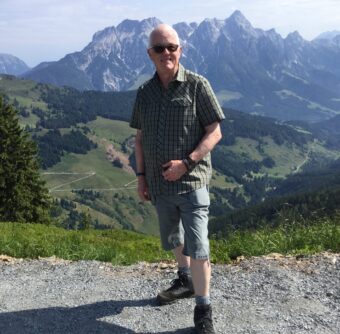 Immediately after diagnosis, I was admitted to hospital for 4 days where extensive testing was taken of my vital organs to determine the spread of the illness. Fortunately, the disease was contained within my ENT and methotrexate was prescribed as an appropriate medication.

I continued with this medication for about 6 months but didn’t realise that the disease was slowly creeping back into my system. This culminated in a bout of pneumonia, resulting in an ambulance trip to the hospital and immediate admission to Intensive Care. The vasculitis had severely impacted on my kidneys. Over the next 10 days I was on oxygen; receiving blood transfusions and a plasma transfer; had a kidney biopsy; was treated with cyclophosphamide and put on kidney dialysis. The medical team did a fantastic job and after just 10 days I was back on my feet and able to go home. I was, however, on numerous medications coupled with frequent hospital appointments.

Out of curiosity I went to a meeting and, for the first time since being diagnosed, I met about a dozen people all suffering from different variants of vasculitis. Considering how nasty the disease is, it was uplifting to see so many happy, upbeat individuals who were living and coping with the condition.

Around this time my Rheumatologist told me about the Lauren Currie Twilight Foundation and suggested that it may be of interest to me. Out of curiosity I went to a meeting and, for the first time since being diagnosed, I met about a dozen people all suffering from different variants of Vasculitis. Considering how nasty the disease is, it was uplifting to see so many happy, upbeat individuals who were living and coping with the condition.

Grant and Adrienne, even after all these years, continue to be the driving force behind keeping the charity at the forefront of Vasculitis research and patient support in Scotland. Many of the country’s Vasculitis medical professionals are keen advocates of the charity and I try where possible to be involved and help with various initiatives.

Since the above episode where my kidneys became an issue, I have had two further relapses. On both occasions, the consultants recognised the symptoms at an early stage and Rituximab was administered successfully to counteract the disease.
Over the last 9 years I have been in remission and for around 6 years the disease has been dormant. When you live with vasculitis you cannot afford to be complacent as it can flare at any moment and strike you when you least expect it. Since I started on my journey with vasculitis, I have been fortunate to have a great medical team looking after the various health issues that I have.

The illness is here to stay, but so am I…

Get information See our factsheets about GPA and other types of vasculitis and treatments.
Support groups Pete found support groups helpful - see if they help you, too.
Patient stories Read more stories from people with vasculitis.
Donate Please donate to help people like Pete and fund our support groups.