Eunice has a form of vasculitis called MPA. This is her story.

Eunice reflects during Vasculitis Awareness Month in May about her experiences living with Microscopic Polyangiitis (MPA).

It’s Vasculitis Awareness Month, a time when charities like The Lauren Currie Twilight Foundation encourage others to help raise awareness for this rare and debilitating illness which I have. It made me reflect on my own journey and this will maybe resonate with some of you.

After years of being unwell with different symptoms – conjunctivitis, rhinitis, sinusitis, uveitis, retinal vasculitis – I was eventually diagnosed with Microscopic Polyangiitis (MPA), one of the many forms of vasculitis, a rare auto-immune condition. There is no cure for MPA. I now need to take toxic medication to control this disease. It may go into remission, but I’ll never be free from vasculitis.

I commenced treatment which involved taking large amounts of steroids, medication which DID NOT agree with me. My eyesight started to deteriorate to the point where it felt as if I was looking through frog spawn and I also developed light sensitivity.

The pain was so severe I was given injections to my eye. My joints ached and my feet burned every time I put them on the ground. Consequently, I was forced to take medical retirement. Finally, my specialist gave me mycophenolate mofetil and slowly I began to feel the difference. I remained on this medication for 17 years and went into remission. Although it was tried on a few occasions to reduce the medication, I always flared.

I had been told that vasculitis was a very rare condition and in fact was told many years ago that I was the only person in Scotland with MPA. After trawling the internet, I found a few things but nothing I could relate to in Scotland about my illness. I don’t remember how I heard about the Lauren Currie Twilight Foundation, but I noticed that there was a meeting in Glasgow. 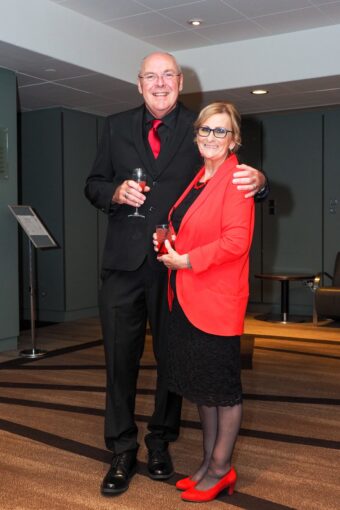 I can honestly say that being a member of a support group has opened a whole new chapter for me. The help, support and information that I have received on this journey has been invaluable.

Not knowing what to expect, Bill and I headed off and were shocked to find that there were other people with vasculitis. We were made very welcome, and I can honestly say that being a member of a support group has opened a whole new chapter for me. The help, support and information that I have received on this journey has been invaluable. I am sure Grant and Adrienne Currie never knew just what an impact the charity, set up in memory of their daughter Lauren, would and does have on us. I have met many fellow sufferers who have become firm friends.

Vulnerability reared its head again when my husband, who is also immunosuppressed, contracted COVID-19 and ended up in high dependency unit fighting for his life. The wonderful care and attention he received from the staff at Royal Alexandra Hospital in Paisley ensured that it was a battle which he won.

I count myself as very blessed and will happily talk to anyone and provide support where I can.

Take care of yourself.
Eunice x